What is Augmented Reality?

Augmented Reality (AR) might sound like a complex technical buzzword, but it actually has a fairly simple meaning. AR is a technology that combines the real world with digital objects (2D or more often, 3D).

The trendy video game “Pokemon Go” is the most popular example of AR in action. In the game, 3D animated models of Pokemon appear where you direct your camera depending on which location you are in. This is where our actual, physical reality meets the virtual, fantasy world– thus becoming Augmented Reality.

Sephora created a “Virtual Try On” experience where shoppers can test out make-up digitally vs. in-store. This example illustrates how Augmented Reality has been a digital tool for consumers to access information on products from the comfort of their own home.

What’s the difference between AR and VR?

Virtual Reality is a 100% digitally-created experience that currently requires the use of a headset device.

Augmented Reality combines real life with virtually-created elements and it is typically accessed through a camera lens that has AR capabilities.

How do you use AR?

Fortunately, almost everyone who has access to a smartphone also has access to fairly sophisticated AR software (and hardware) technology, thanks to Apple’s ARKit and Google’s ARCore which enables AR development for iPhone and Android devices.

The most prevalent form of AR technology today is accessible through smartphone apps that utilize the camera to integrate the virtual experience right into the users’ own environment. Browser-based AR experiences exist as well and are becoming more popular.

The best way to see this in action? Try it out yourself!  Click here for a demo of a virtual-try on experience.

Where is Augmented Reality used?

There are applications for AR in most every industry. Currently, AR can be found in healthcare, education, military, gaming, and real estate, but the one of the most popular uses of the technology is for brand marketing.

Take an example of marketing that uses AR from Pepsi, one of the most iconic brands in the world.

In order to generate publicity buzz around the Pepsi Max campaign, “Unbelievable,” Pepsi integrated AR technology into a popular London bus stop shelter. With this technology, Pepsi was able to simulate Unbelievable experiences for the unsuspecting bus stop patrons.

Why is Augmented Reality growing in popularity?

Since AR’s conception in 1957, the technology has come pretty far. Augmented reality technology used to look a little something like this:

Today, AR can be integrated into almost any mobile device with a camera. The technology drastically improves each year and as it continues to get better, more and more brands and industries are starting to pick it up.

One of the most unique and exciting things about AR is that is provides users with the ability to virtually sample different products and experiences before they buy them.

Recently, Sally Hansen ran an online AR ad that enabled users to virtually try-on different colors of nail polish. This technology is exciting for marketers who want users to have superior product experiences as well as consumers who want to be able to sample everything before they buy.

AR won’t be going anywhere as long as people continue to find increasingly useful applications for it. From transforming the way that we use mapping apps, to improving military operations– the potential for AR in our society is tremendous.

AR can be used in navigation:

It can also be used in the military:

Augmented reality games are being developed as well: 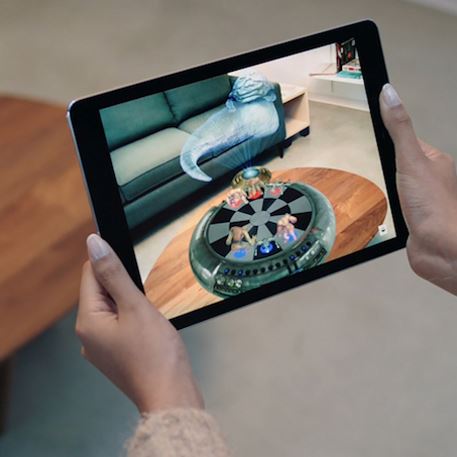 Augmented reality in the classroom is also a tool used by educators to more cleverly explain concepts by using 3D models:

The future of Augmented Reality in our society is a promising one. By 2025, the technology is expected dominate a large number of industries. It is expected to consume $11.6 billion of what will probably be a trillion-dollar gaming industry. Other industry impacts are depicted below:

The impact of AR on the retail/marketing industry will also be worth paying attention to. According to a survey, 71% of people claimed that they would shop more frequently at stores that offered AR experiences. In the same sample, 40% of people even went as far as to claim that they would be willing to pay more for products that included an AR experience.

Expect to see a surge of brands using AR to promote their products and experiences in the coming years.

Popular consumer brands like Converse have already hopped on the AR trend and they currently have a Shoe Sampler app that allows users to virtually try-on shoes when they’re shopping online.

WE ARE THE LEADER IN 360° VR ADVERTISING

OmniVirt is a 360° VR and AR advertising platform for brands, publishers, and developers. We power immersive advertising across all browsers and devices, on web and mobile.